Fantastic views from the roof of Africa

Lesotho – The Kingdom in the Sky

High in the mountains of Southern Africa, unique in that it is an independent nation completely surrounded by South Africa, is the Kingdom of Lesotho, known as the Mountain Kingdom or Kingdom in the Sky, it holds a wealth of different experiences which is in store for those who visit. Mountains, valleys and rivers present unforgettable panoramas for tourists with spectacular mountain scenery as a backdrop to some of the most exciting holiday activities in Africa. In the mountains, visitors will find the source of Lesotho’s crystal-clear water, which also waters the green pastures for livestock and is home to numerous fish for which people from all over the world visit to fly fish in.

Lesotho offers the chance to enjoy Africa’s majestic beauty, the simplicity of a mountain people, and a serene quality of life for discerning travellers from all over the world. A magnificent opportunity to explore nature still little changed by man, still unspoilt by crowds of tourists, and to appreciate the untamed but beautiful landscapes of the soaring Maluti and Drakensberg mountains. The invigorating mountain air, spectacular panoramas of rocky crags, deep valleys and fields of alpine flowers, and the warm and friendly welcome of the Basotho people, set Lesotho apart as a special holiday destination.

To explore Lesotho has become very easy. Excellent new roads wind up into the mountains, while 4×4 treks are an exciting way to explore the more out-of-the-way sites. But for most people the ideal way of exploring Lesotho is on the back of the gentle, but sure-footed, Basotho pony — the traditional transport in the mountains.

Lesotho is Africa, but a different Africa, a special Africa, for Lesotho offers an appeal and an adventure that is rarely found in more commercialised destinations. 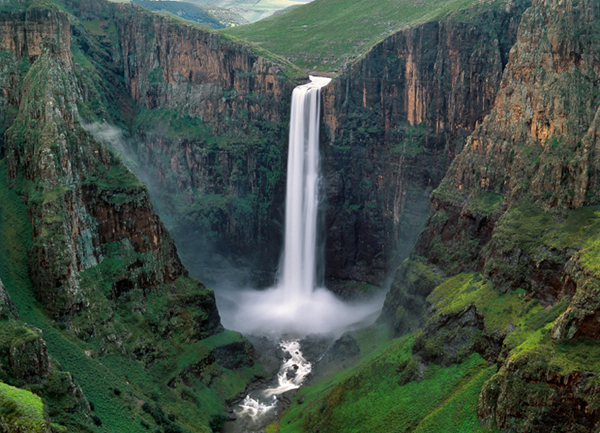 Situated between 28 and 31 degrees South and between 27 and 30 degrees East, Lesotho lies entirely outside the tropics, at a considerable height above sea level, and is thus bilharzias and malaria free destination. It has a land area of approximately 30, 555 km2, making it similar in size to Belgium or a little larger than American State of Maryland in USA. The mountain, Thabana-Ntlenyana is, at 3,482m, the highest in Southern Africa, while the highest single drop fall in the Southern Africa Maletsunyane is 192m, having the highest abseiling cliff in the whole world at 204m. Often referred to as the “Switzerland of Africa”, it is blessed with a beautiful, often a snow-capped range of mountains, the Maluti.

Lesotho is only one hour by air or four hours by road from Johannesburg in the Republic of South Africa.

The Kingdom is a home to the largest and most ambitious civil engineering project in the whole of Africa, Lesotho Highlands Water Project (LHWP), which has harnessed and commercialized her up-stream surplus water sources – often referred to by Basotho as their “White Gold”.

Our recommended places to stay in Lesotho

How to get to Lesotho

The majority of visitors to Lesotho arrive by road. Fourteen border control posts offer entry into Lesotho from South Africa. Because of the ruggedness of terrain in some parts of the Mokhotlong and Qacha’s Neck districts, four-wheel-drive vehicles are advised for these parts.

Visitors must have valid passports. Visa are required except by citizens of countries which have visa abolition agreements with Lesotho and citizens of some Commonwealth countries.