The Victoria Falls or Mosi-oa-Tunya (Tokaleya Tonga: the Smoke that Thunders; the ‘i’ is silent) is a waterfall located in southern Africa on the Zambezi River which forms the border between the countries of Zambia and Zimbabwe. The falls are believed to be the largest in the world in terms of the volume of water that passes through.

These ancient and truly spectacular Falls were first made known to the outside world in 1850’s by Scottish explorer extraordinaire, David Livingstone. Livingstone had been attempting to find a route to the East Coast of the African continent. Travelling south east from Luanda to Sesheke, he encountered this most magnificent waterfall and renamed it the Victoria Falls after the British Monarch, Queen Victoria. Livingstone was led to the Falls by the Makalolo tribes people in a dug-out canoe. 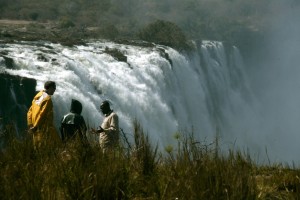 Soon after Livingstone’s reports about the Victoria Falls spread across borders, the Falls began to attract Anglo traders. A rustic trading settlement was set-up on what is now the Zambian riverbank and became the original Victoria Falls town called Old Drift. The number of foreign visitors rose steadily and people walked, rode on horseback or travelled by ox-wagon from the Transvaal in South Africa to view the Falls. Malaria began to take its toll on the settlement and at the turn of the century, Old Drift was shifted to the site of the present day town of Livingstone in Zambia.

Zimbabwe offers fantastic experiences close to the Victoria Falls. Stays in Private Reserves and in luxury Hotels are standard here in the Zimbabwe side of the mighty Zambezi River. The Town of Victoria Falls offers a number of value for money hotels and excellent luxury hotels for the discerning traveller. Our recommended hotels and lodges to stay in on the Zimbwabwe side is as follows:

The Kingdom Hotel – This is a fun-filled resort hotel aimed unashamedly at the tourist who wants to take in the majesty and excitement of one of the Seven Natural Wonders of the World as well as enjoy a holiday adventure as part of a group, with someone special, with the children, or as a single traveler.  more……

The Stanley and Livingstone at Victoria Falls

The Zambia side of the mighty Zambizi River offers guests excellent safari experiences and hotel stays in the town of Livingston. There are a number of adventure activities available on the Zambezi river, namely, White water rafting, bungee jumping, helicopter flips, boat excursions on the river and sight seeing tours of the falls itself. Our recommended stays on the Zambian side of the Zambezi River is as follows: