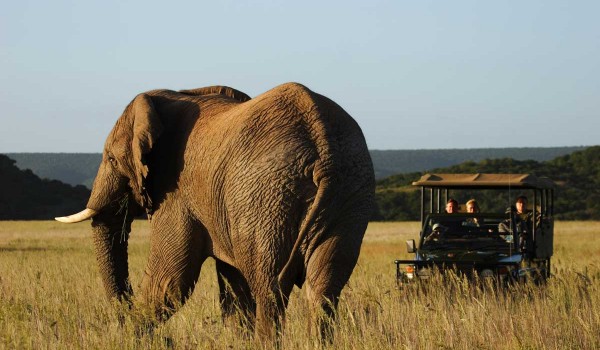 Shamwari Game Reserve is situated in the diverse Eastern Cape Bush half way between Port Elizabeth and Grahamstown along the Bushmans River. Shamwari Private Game Reserve is the ultimate luxury big five African bush retreat and has numerous international awards for their conservation efforts.
Shamwari Game Reserve is a natural extension for any traveler, travelling up the Garden Route from Cape Town and is also a great way to start your African holiday. Shamwari is about conserving a vanishing way of life and is the realization of one man’s dream, and the success of many people’s passion. Shamwari is steeped in pioneer history, dating back to when thousands of game roamed wild and free in the Eastern Cape.
Shamwari Game Reserve boasts five eco-systems in its 25,000 hectare reserve and this enables them to support the vast numbers of game and many forms of plant and bird life. The Reserve is a conservation victory by successfully reintroducing the game that once roamed free on this land many years ago.
The rangers and staff at Shamwari Game Reserve will ensure that guests will enjoy a memorable adventure that is personalized to your needs. Boasting a complete wildlife research team and also having its own anti poaching unit allows Shamwari to keep an ecological balance in this reclaimed piece of wilderness.
10 reasons why one should visit Shamwari Private Game Reserve: